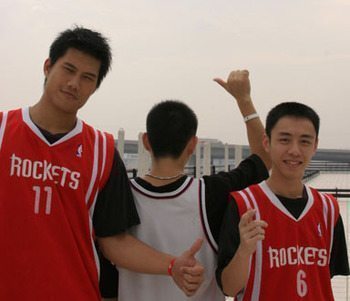 Back in 2005, a star was born (well, two stars. Okay, more like 2 and a half if you count the third roomie in the back who was always playing video games.) You know who I’m talking about, internet people!

The Back Dorm Boys (also known to the internet as “Two Chinese Boys” or “Asian Backstreet Boys” in case you had no idea they were referred to as the Back Dorm Boys) were the stars of one of the first crazy viral YouTube videos. The boys, Wei Wei and Huang Yi Xin (and their third, less involved roommate, Xiao Jing) recorded a webcam video of themselves in their college dorm room, very dramatically lip-syncing to the Backstreet Boy’s “As Long As You Love Me,” and it took off in China and then the US. They recorded more videos to other pop songs including “I Want It That Way,” “Get Down,” and “Larger Than Life” by BSB, as well as hits by Jessica Simpson, The Black Eyed Peas, and several Chinese pop stars. Their videos went viral (most notably “As Long As You Love Me” and “I Want It That Way”) and got them noticed, leading to contracts with brands like Motorola and Pepsi and a deal with a Beijing talent agency called Taihe Rye. You can see a full list of their songs here.

Pretty much, they lip-synced some 90s songs and became an internet meme and TV celebrities. Sweet deal!

Check out their two most watched videos below (and revel in the hilarious BSB goodness!)

What was your favorite video by the Back Dorm Boys?