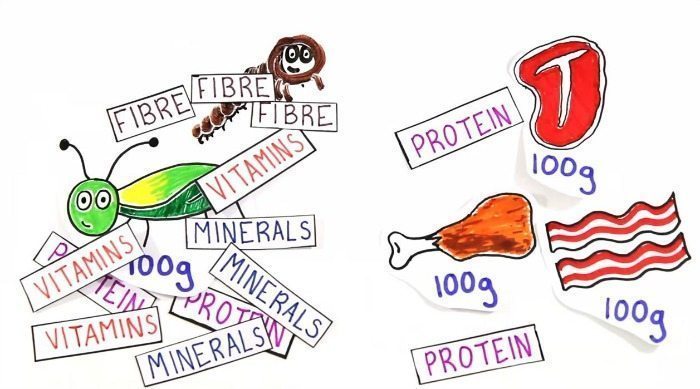 Video: Should We All Be Eating Bugs?

Bugs are already eaten in other parts of the world and, much to your disgust, can be found in some of the food you already eat (such as peanut butter, spinach and beer).

This video provides a lot of not only important information about why eating insects would be a smart choice for both our health and for the future of agriculture.

The AsapSCIENCE guys also have an AsapTHOUGHT channel on which they posted a video of “How to Eat Bugs” in which they demonstrate the different techniques one could use if they wanted to incorporate bugs into their every day life. Some of the tips they gave were adding dehydrated meal worms into a chip dip or using cricket flower to make ‘chocolate chirp cookies.’

They discuss in both videos the many ways that the changes you make eating insects would be extremely environmentally friendly such as having insect farms next to farms that already exist so that the insects could eat the waste produced by the farm and the humans could eat those insects. Also, one of the ways they are healthier than livestock is that we are less closely related and therefore the insects are less likely to carry disease that livestock would carry such as bird flu.

I think I would be okay with eating bugs if they were secretly incorporated into my food or if there was no way of knowing or seeing that I was eating bugs (such as the cricket flower).

Would you start eating bugs to protect the environment?