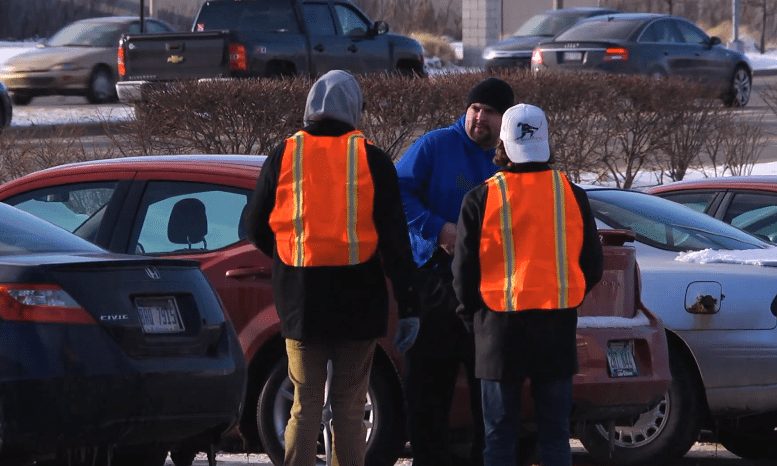 Since yesterday was April Fools Day, it would be so wrong of us not to post the latest video from our favorite college pranksters, the Ferris Trolls! Yesterday they pulled off a fabulously executed April Fools Day prank where they dressed up in reflective orange vests and gave people “parking tickets” (which were actually envelopes with a card inside letting the victim know they were pranked.) Example:

Of course, they recorded the entire thing on video for all of YouTube (and us!) to enjoy and the best part of the whole thing is that many of the parking tickets were handed out to cars with the driver still inside (which, as you can imagine, surprised and irritated most of them) and when asked why they were getting a ticket, the Ferris Trolls responded with ridiculous reasons like “this is one of the parking spots that you have to back into,” and, “you can only drive in reverse here.” The reactions, both in the video and on Twitter, were priceless. Example:

Got a #trollsticket on my car after leaving FLITE. I was getting my speech ready to give to DPS when I opened it. Hahahaha.

And of course, the Ferris Trolls dedicated this prank to “all those wonderful commuters.” Check out the hilarious video below:

Of course that’s not all! The Internet was on point yesterday with tons of ridiculous pranks, and if you haven’t seen or heard of them all yet, Mashable has a great roundup of the best of the best! Including “Google Nose,” YouTube announcing that it’s shutting down, and more awesome pranks from Seamless, The Guardian, and more. Not to mention, Oberlin College pranked everyone by announcing that they were now a university for cats (AKA Mewoberlin.) Also, the White House and Kid President teamed up! Hilarious. Check out the roundup here.

What was your favorite April Fools Day prank this year? Did you get a ticket from the Ferris Trolls? Tell us below!