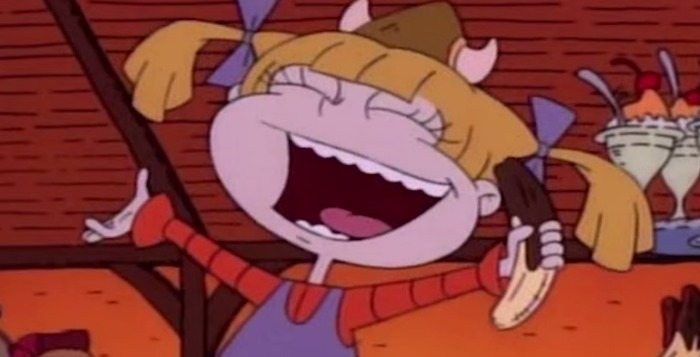 Everyone has their preferences. Some of us 90s kids grew up watching the Disney channel, while others were glued to Nickelodeon or PBS. But one thing that every 90s kid watched (if you didn’t, shame on you) was Rugrats. And one thing that all 90s kids can agree on regardless, is that Angelica Pickles was the meanest, brattiest cartoon character of our youth.

Ugh. Just look at that maniacal laugh. So calculating. So manipulative. So spoiled. So Angelica.

These days, pop star Justin Bieber seems to be channeling Ms. Pickles in the worst way. Between drag-racing, fighting with his neighbor, spitting on his fans, and more, the Biebs has been acting like an immature, bratty little child. Justin, is it that hard to just act like the 20-year-old man that you’re supposed to be? Tone it down a little, bro. Take a chill pill.

BuzzFeed made this connection and decided to see if people could even tell the difference between Angelica Pickles and Justin Bieber. They went out on the street and read a quote that was either a famous Angelica Pickles line, or one of Justin’s infamously inappropriate comments, and asked participants to name who said it. Unsurprisingly, almost all of them said incorrect answers. Why? Because it was actually impossible to tell the difference between them. (At least until the last one, which contained some, uh, “choice” vocabulary. Obviously not Angelica.)

I tried to guess along as I watched this, and I failed miserably too. But if you can tell the difference, more power to ya! It either means you’re obsessed with Justin Bieber, or obsessed with Rugrats. Either way, I’m judging you.