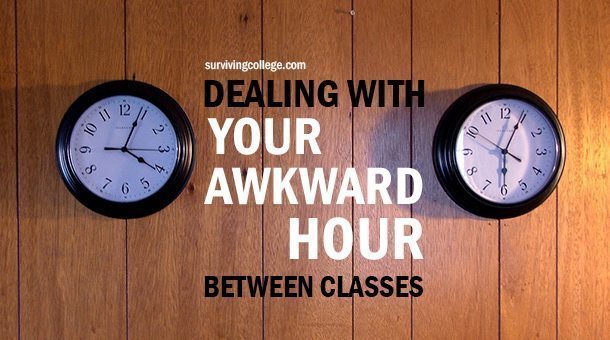 Dealing With Your Awkward Hour Between Classes

I know the feeling. You’re between classes and you have this awkward one-hour gap that’s not enough time to do a decent amount of work, but too much time to simply have lunch or grab a snack. At least that’s what I thought anyway, but earlier this week I found an excellent way to make use of that one hour between classes.

Your shortest homework ever.

I managed to get through notes for a 5-paged philosophy article in that hour. Granted, it’s probably the shortest philosophy article that I’ve ever had to read, but hey, it worked. I brought the textbook with me to campus (guess who’s living off campus now!) and got it done with ten minutes to spare to grab a coffee before my next class. Boo ya.

Sure, an hour is probably too much time to have lunch on your own, especially if you packed one and you’re used to cramming in meals wherever possible. But grabbing a friend to have lunch with you on some days can be a good way to use up that time between classes. Sure, you’re not being academically productive, but your friends are important too!

Get cash. Buy supplies from the bookstore that you’ve been missing for weeks. Go to the pharmacy. There are so many errands that we have to do on a daily basis that we always forget about, and then we end up wasting like half an hour at the end of class doing things that we could have done between classes. You’d be surprised at how much time you can save by going home right after class instead of doing errands first!

What else can you do in an hour?